RAINPLUS®, HOW DOES IT WORK? 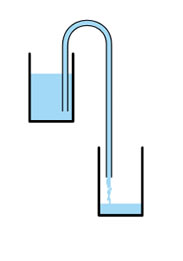 Rainplus® is defined as a siphonic rainwater drainage system because it is based on the same principle as a siphon. The siphon is in general a reversed U shaped pipe used to pour a fluid from one container to another located in a lower position. When the pipe is full, the fluid contained in the longer stretch of pipe tends to fall due to its weight causing the suction of the liquid in the shorter section, which is lighter in weight.

The performances of the Rainplus® siphonic drainage system are therefore decidedly better than those of a conventional system where the driving force is generated exclusively by the amount of water that accumulates on the roof. When the siphonic drainage system works at full capacity, the “siphon effect” is triggered resulting in a driving force that is proportionate to the height of the roof and the end of the circuit, which is typically located at ground level.

Such power generates levels of positive and negative pressures in specific points of the circuit in this way the speed and, as a consequence, the flow rates of the system (Bernoulli’s principle) are rapidly increased.

EN 1253 and ASME A112.6.9 technical standards are used to evaluate the performances of a siphonic system and, as they define the measurement method of the flow rates as a function of the water depth on the roof, they allow the flow regime phases to be analysed. 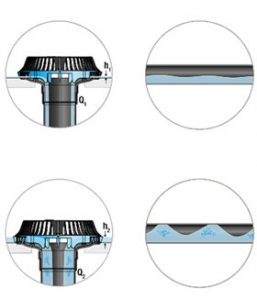 STAGE 1
With a moderate flow, of 10 or 15% of the design rainfall intensity value, the roof outlet works as in a conventional system and the flow is defined “gravity flow”, since air content in the pipes is elevated.

When the water discharged from the roof is between 10 to 15% and 60% of the full bore flow condition, water flow is discontinuous and the system therefore fluctuates from a gravitational flow regime to a full siphonic action. At these rainfall values the water that accumulates on the roof fills the outlet, cutting off air flow into the pipe and triggering the siphonic action. The speed of water discharged therefore increases, which results in falling water levels, allowing air to be drawn into the piping network and breaking the siphon; for this reason this stage is called “plug flow”. 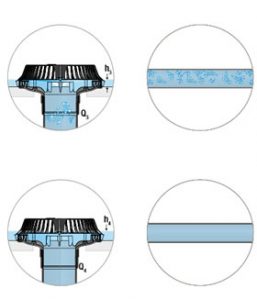 When the water discharged is between 60% and 95% of the design rainfall intensity value, the pipes are completely full of water, although many air bubbles are still present. This stage is called “bubble flow” and features high flow speed generated by the siphonic effect.

When the flow is over 95% of the design rainfall intensity value, the siphonic effect operates at full capacity reaching maximum velocity with no air entering the pipes. This stage is called “full flow” and does not produce noise or vibrations. 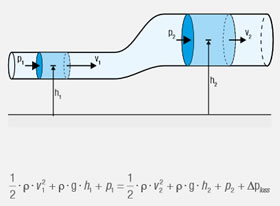